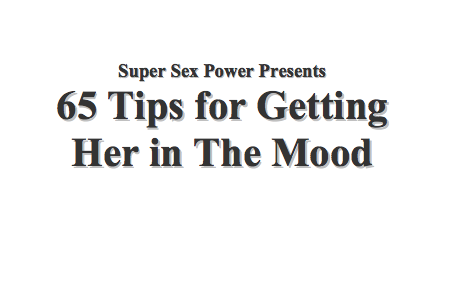 This course is designed to do one thing:

Help you get more sex.

To give a brief version of my experience (just in case you haven’t heard it before), years ago, when my wife never wanted to have sex.

Because I had other women in the past that enjoyed having sex with me, I just assumed it was her.

I just assumed that she had a libido problem or something along those lines.
At some point, I realized that there were times when she was very turned on and willing.

It became clear that she had no problem getting aroused, it was just “different things” pushed her buttons.

My biggest problem was I was expecting her to get turned on by the same things that worked on other women.

Once I started to apply the right strategies for her + changed my thinking, the sex life improved pretty quickly.

The best part, it keeps getting better every year.

The biggest realization was that with certain women, you don’t have to “do much” to get them going.

But with other women, you have to “adapt and learn” what works for them. Then pretty soon, everything becomes much easier.

Over the years, I discovered that there are 5 types of errors that guys make when attempting to get a woman turned on.

For example: Kevin thinks that rubbing the top of a woman’s head is going to trigger sexual arousal.

2) Incomplete process – The guy applies the right process but he leaves out a step.
For example: Jim’s wife can get aroused when he does A + B + C + D, but Jim only does

3) Distinction – The guy thinks his wife can be turned on by a certain process just because it works on another person.

For example: Kevin thinks his wife can be turned on by kissing because it gets him turned on (or it used to get an ex-girlfriend turned on). However, it doesn’t work or it’s not enough for his wife.

4) Bad execution – The guy applies the right process, but he does it the wrong way. For example: Jim’s wife can get aroused by kissing, but Jim is bad at kissing (or he

doesn’t kiss her like she wants to be kissed).

5) Time distortion – The guy applies the right process, but grossly underestimates the time involved to have the desired impact.

For example: Kevin thinks his wife can be turned on by doing a process for two minutes, but it really takes (roughly) thirty minutes.

This course is not only designed to correct these five common (and often hidden) errors, but it will help you take things to levels you never knew was possible.

Because everyone’s situation is different, I decided to share and numerate “the best of the best” tips that I learned in the past 10 years to help you get your woman turned on as fast and efficiently as possible…

Whenever you apply the RIGHT PROCESS (for getting a woman turned on) while doing it MORE OFTEN….by the law of numbers…. you are forced to get more sex.

Discover How You Can Last 30+ Minutes Longer And Give Her Multiple Orgasms Without Creams, Condoms or Nerve Numbing Pills

Your Simple Guide to Ending Premature Ejaculation Forever…And Becoming That 1 in 100 Guy Who Delivers Her Multiple Earth-Shaking Orgasms Every Single Time!

Getting the Sex You Want – Tammy Nelson

Shed Your Inhibitions and Reach New Heights of Passion Together

We’ve been offering online education since 2006 and with 10,000 students in our online school, Foreplay Mastery is our most popular course offering.

Full-Body Orgasm Mastery: Give her a full-body orgasm & make her addicted to you in bed. (guaranteed!)
What You’re About To Learn Will Leave Her Utterly Impressed, Speechless & Shaking With Pleasure And Desire For You!
It’ll catapult you among the few men (maybe 2%) who have mastered the art of giving a woman a full-body orgasm!

Clit-ology: Master Every Move from A to G-Spot to Give Her Ultimate Pleasure Kindle Edition

“Speak Her Sex Language” is a book about the two most vital aspects of any long-term intimate relationship – communication and sex.