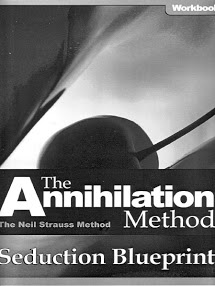 The Annihilation Method is a series of advanced attraction, seduction and dating techniques invented by Neil Strauss (aka Neil Strauss, author of The Game).

He has become famous for having pioneering many of the pick up artist routines that guys all over the world use to meet women.

This method was the result of several years experience, meeting and dating thousands of women. It was to be Strauss’ final contribution to the world of dating and seduction (though he later went on to form the StyleLife Academy).

Rather than a single technique, The Annihilation Method is a whole bunch of Neil Strauss’ most successful routines, openers and techniques that he personally used to date countless smart, beautiful women.

The Annihilation Method was released on DVD (at the staggering price of $3,799) after creating some dramatic buzz in the seduction and dating community.

It contained several DVDs and manuals, laying out step-by-step how to approach, build comfort and attraction and seduce just about any girl in just about any situation.

Seduction and pickup techniques from The Annihilation Method include the Black Mirror, L.A.S. V.E.G.A.S., the Five Questions, the Cube, and so on.

The DVD contained mentions of several gurus Strauss had personally learnt from, such as David DeAngelo. There were also guest sessions with Steve Piccus & Hypnotica, as well as Strauss’ good friend from The Game, Mystery.

Originally the Annihilation Method was taught to the Final Five, who paid thousands of dollars each to attend the exclusive seminar. Strauss taught these final five guys his ‘most powerful pick-up technique’ after he announced he was ‘leaving’ the community.

The Anihilation Method sold out within a matter of hours. It’ll go down as not only one of the greatest seduction & dating products ever released.

The Annilation Method WAS sold through only375.com. And although it will never again be released, it can be found hidden in certain corners of the ‘net, if you know where to look :O

However there’s an easier way for you to learn the fundamentals of how to meet, attract, seduce and date beautiful women that were laid down in The Annihilation Method. You can learn from Neil Strauss directly by signing up for his dating and pickup coaching program.

Neil Strauss (also known by the pen name Style or Chris Powles), is an American author, journalist and ghostwriter. He is best known for his best-selling book The Game: Penetrating the Secret Society of Pickup Artists, where he describes his experiences in the seduction community in an effort to become “a pick-up artist.” He is a contributing editor at Rolling Stone and also writes regularly for The New York Times. Neil Strauss was until 2005 primarily known for journalism and ghost-writing. Having written extensively for ‘Rolling Stone‘ magazine on artists like Eric Clapton and Nirvana.

After graduating high school from the Latin School of Chicago, Strauss attended Vassar College. While in school he began his career writing for Ear, an avant-garde magazine, and editing his first book, Radiotext(e), an anthology of radio-related writings for the postmodern publisher Semiotext(e). He moved on to the Village Voice, where he did everything from copy-editing to fact-checking before becoming a regular reporter and critic. He was invited by Jon Pareles to become a music critic at The New York Times where he wrote the Pop Life column and front-page stories on Wal-Mart’s CD-editing policies, music censorship, radio payola, and the lost wax figures of country-music stars.

He was then invited by Jann Wenner to become a contributing editor at Rolling Stone where he wrote cover stories on Kurt Cobain, Madonna, Tom Cruise, Orlando Bloom, the Wu-Tang Clan, Gwen Stefani, Stephen Colbert, and Marilyn Manson.

He won the ASCAP Deems Taylor Award for his coverage of Kurt Cobain’s suicide for Rolling Stone and his profile of Eric Clapton in The New York Times Arts & Leisure section. Strauss also contributed to Esquire, Maxim, Spin, Entertainment Weekly, Details, and The Source. He was also featured in Beck’s music video Sexx Laws which also featured Jack Black, and as a guest star on the season six finale of Curb Your Enthusiasm.

After leaving The New York Times to ghostwrite Jameson’s memoirs, Strauss wrote The Game: Penetrating the Secret Society of Pickup Artists (Regan Books, 2005), a book about a sub-culture of pick-up artists known as the seduction community. The book made a month-long appearance in the New York Times bestsellers list in September-October 2005, and reached the #1 position on Amazon.com immediately after its release in the United States. It was optioned to be made into a film by Spyglass Entertainment, with Chris Weitz adapting and producing .

On March 4, 2009, The New York Times wrote that Strauss (along with rock biographer Anthony Bozza) had started his own publishing company, Igniter, as a subimprint of HarperCollins. Igniter’s first title, the Times reported, will be “The World According to Bozo the Clown.”

Strauss’s newest book, Emergency: This Book Will Save Your Life (Harper, 2009), for which he spent three years undercover amongst survivalists, tax-dodgers, billionaire businessmen, and the government itself, was hailed by Rolling Stone as an “escape plan” for the current world crisis. It entered the New York Times bestseller list at 3.

In the seduction community, Strauss is known by the pseudonym “Style“. Some in the seduction community referred to Neil, based upon his reputation for picking up exceptionally beautiful women. Later, when information about upcoming release of The Game spread across the seduction community, some considered Strauss a traitor, revealing the guarded secrets to general society and thus reducing their effectiveness (this view is not shared by everyone). Strauss abandoned his pickup artist’s lifestyle and settled with a long-term girlfriend Lisa Leveridge, who played in the band Hole (Courtney Love).

In 2004 he published an article in the New York Times about his experiences.

At the end of 2005, Strauss passed his knowledge to 5 selected followers at a three-day seminar at his California home. During the event, many legendary personalities came across to share their knowledge, including Ross Jeffries, Steve Piccus, Mystery and Hypnotica.

Neil Strauss has released a new book, The Rules of the Game, that contains two volumes. The first is an 30-day transformation bootcamp in which you can become more socially proficient. The second is his collection of adventurous stories dubbed “The Pickup Artists Companion“. Both are excellent reads.

After publishing the book, Strauss temporarily retired as a pickup artist and settled with a long-term girlfriend Lisa Leveridge, who played guitar in Courtney Love’s all-female band The Chelsea. An article in the Sunday Mirror, suggested that Leveridge broke up with Strauss in February 2006 to date Robbie Williams. Strauss denied the Williams rumor, but confirmed his breakup with Leveridge on his mailing list a few months later.

Through his VIP mailing list, Strauss announced the Stylelife Challenge on May 31, 2006. Strauss challenged men to get a date in 30 days or less. During the entire month of July 2006, participants were given daily challenges on the Stylelife. These challenges were designed to help men makeover their look, overcome their fears, and get a date within a month. While the primary goal was simply for participants to get a date, the most improved won a week-end in San Diego with the Inner Game guru “Hypnotica” (“Rasputin” in The Game).

On March 10, 2007, through his VIP mailing list, Strauss announced the Stylelife Academy, which he describes as the first online school for self-improvement and attraction. Enrolled students study a variety of subjects ranging from mind-shaping, to body language, to story telling, to being a good conversationalist in daily online classes.

In spite of his success, Neil was aware that there was one part of his life where he had dealt with constant failure: he just couldn’t seem to get any action from the opposite sex. His obvious talent for writing wasn’t of much assistance when it came to dating. He started researching online and found that there was a ‘secret society of pickup artists‘ who consistently held meetings in order to sharpen their skills with women.

Strauss signed on for a bootcamp held by Mystery, and thus began the short journey that would very quickly transform into the best selling book: ‘The Game: Penetrating the Secret Society of Pickup Artists‘. The book was essentially a ‘who’s who’ of pickup while the community was still in its infancy. It describes Strauss’ rapid rise within the pickup community, morphing himself from Neil Strauss, well known writer, into ‘Style‘, master pickup artist. Using the varying techniques he acquired from Mystery and a host of other gurus, Style eventually became known as the “No. 1 Pick-Up artist in the world” shortly after the books release.

‘The Game’ went on to become such a tremendous financial success that in late 2007, Neil wrote a sequel; ‘The Rules of the Game.‘ Wanting to pass on his seduction knowledge to the community, Neil also created a school for pickup artists. Although it is extremely rare for Style to do ‘live demonstrations‘ he shares his pickup ideas with the community freely.

Neil Strauss’ contributions to the overall growth of the Seduction Community are undeniable.

Welcome to Extreme Sex Drive, the course designed to take your libido to the extreme. Our goal is to maximize your body’s efficiency to naturally create testosterone and produce semen. This will give you the edge to have sex more often, and experience a higher zest for life.

The huge load formula is actually an amazingly formulated recipe of smoothie for the penis. You read it right. A smoothie for a huge and erected penis.

Adam Armstrong – How To Make Your Woman Do Anything In Bed

These SECRETS Will Help You Get All The Red-Hot, Dirty, Filthy, Downright Nasty Sex You Could Ever Want. Guaranteed.

Bedroom Boss is probably the greatest program ever created about how to:
– Give women Mind-blowing Orgasms – in many different ways

Armed with the techniques in this program, I know you’re going to start having MUCH BETTER SEX. In fact, there are 7 major improvements you’ll almost certainly experience within just a few days of putting these techniques into action.

Adam Armstrong – How To Last Longer in Bed

Here Are The Absolute Basics You Need To Know, If You Want To Turn Yourself Into A GREAT LOVER – The Kind Of Guy Who Can Please Any Woman, Any Time, Any Place…

Can you remember three easy steps, while you’re having sex?
Do you know what a triangle looks like?
…And are you willing to give me 5 minutes of your time, right now?
If you answered “Yes” to all three questions, then I have amazing news for you:

The
“Sex-System”
that gets every guy laid
Discover the…
-Easiest way to meet women
-Best way to get a girlfriend
-Sexual abundance
-Unlimited freedom!

Dating for Women – How to Spot and Avoid Pickup Artists

Pickup Artistry is a movement that has changed the dating game for both men and women, yet many women know little about it, nor the impact it can have on their dating lives

Use the Sexual Decoder System to know exactly which women want to fuck and even which ones are desperate for sex so You can get laid easy without risking embarrassment or rejection.