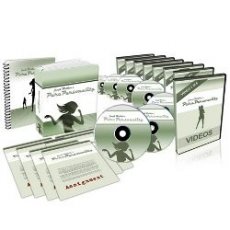 The man behind this programme, Thundercat aka Joseph Matthews, doesn’t have the best reputation in the seduction community, where many have accused him of having no game.Although familiar with his name, I had never seen any of his products, so I was willing to give him the benefit of the doubt.

The videos turn out to be Matthews’ voice over powerpoint slides – a bit of a bait and switch here when you are promised “videos” on the website.

The first two clips explain what Matthews calls “The Addiction Method »: this is about creating a character that is fun and outgoing, getting people addicted to that character, and “wearing a social mask” to be more confident. This is quite dated advice right there – most dating advice has evolved towards getting people to improve their life for real.

Matthew talks about the feeling of self-importance and imposition, both good points but lost in a lot of fluff. Not much to save in video 1 & 2, and the temptation to fast-forward is growing strong.

The third video is about storytelling, and Matthew lists 18 “master plots”, or stories paradigms, if you will. You have to think of a life experience that would fit into one of those. Not a bad exercise, maybe, but a bit arbitrary.One of the problem here is that many of Matthews’ own examples are lame. Stories of his car breaking down, a terrible smell in his home, people farting, music being too loud in his ears; it’s a lot of negative and plain weird stuff that you can’t really see amusing anyone, much less attracting girls.

One example goes like: “I was super drunk, could barely keep my eyes open. So I Iiterally stumbled into my room, in the dark, and collapsed on my bed. And I hadn’t cleaned the sheets in weeks, so it smelled terrible, but I was so tired, I couldn’t move, so I just had to lay there and fall asleep with that terrible smell in my nose.”

This might get you a laugh, but it won’t evoke the most attractive imagery in your target’s mind. Is this the best example to show newbies? I doubt it.

The third video is about “being the life of the party”, and after an OK bit on ownership and reputation, we go right into “the butterfly effect”.It goes like this: you introduce yourself briefly to each group in the club – every single one of them, one by one. You “pop in and pop out, in 30 seconds or less”, just saying “hi, how you doin’?”; then you go right to the next group, until you have done them all.

THEN, you go back for 2-5 mins to EACH and EVERY group AGAIN and “ask them how they are doing and if they need anything, maybe another drink”.

This, Matthews explains, “is to increase your value and show everyone in the room that you are not a weird guy”.

Unfortunately, this is downright wrong. Moving on from group to group at such speed and in a systematic manner is going to make you the weird guy, guaranteed. You might be able to impress a party of 12 year old girls with this trick, but in any grown up venue, no. Just no.

Things pick up ever-so-slightly on the remaining videos. “Conversational Ninjistu” has some good tips on starting and sustaining conversation (I liked the idea of “so” as a gear shifter between topics). “How to be funny” explains how to develop some quick wit and a personal sense of humor. And “How to tease a girl” actually had a lot of nice, inventive lines.

Too basic, and sometimes wrong

Alas, while the last videos are alright, it’s still very basic and doesn’t make up for what came before. There is nothing wrong in covering conversation 101, but teaching only the basics is a bit of a let down. And there is enough bad advice mixed with the good here to get any beginner confused and frustrated.I am sure Matthews is not a bad dude, but he is out of his depth in this field. There are way more experienced seduction coaches out there. For that price and in the area of personality and conversation skills, you will be much better off getting David DeAngelo’s Cocky Comedy & Other Conversation Skills or Vin DiCarlo’s Conversation Cure, both better structured products with more valuable content and tons of examples.

This content is for members only.
Category: Self-ImprovementBy Pick SedOctober 3, 20182 Comments

Self Hypnosis Easy as 1,2,3 – Joann Abrahamsen

The Light of Pure Knowing: Thirty Meditations on the Essence of Non-Duality is a box set that includes: six mp3 CDs with 18 hours of audio; a 248 page paperback book of transcriptions of the spoken meditations; and a slipcase.

Proven Psychological Manipulation Techniques: Guiltless Guide into the Psychology of How Cunning People Get What They Want. How to Play Secret Dark Games to Seize Control and Always Win

The Secret Body of Knowledge in Psychology That Explores the Vulnerabilities of Being Human. Powerful Mindset, Language, Hypnosis, and Frame Control

Guiltless Guide into the Psychology of How Cunning People Get What They Want. How to Play Secret Dark Games to Seize Control and Always Win

A Yogi’s Guide to Joy By Sadhguru – MindValley

The program is divided into three parts: each with a daily video lesson that lasts just a few minutes, but enriches you with new tools and perspectives that serve you for a lifetime.

Own Your Sh-t Make Her Submit – Alexander Graves