Volume 4 Is The “Next Generation” Of Shogun Method Black Books, Containing Handpicked Tactics That We Have Rigorously Tested In The Derek Rake Insider Labs For Maximum Effectiveness 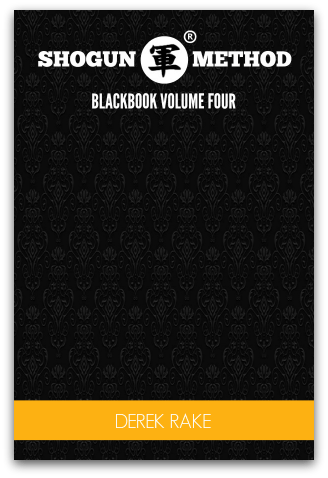 ATTRACT AND EMOTIONALLY ENSLAVE ANY WOMAN

Volume 4 Is The “Next Generation” Of Shogun Method Black Books, Containing Handpicked Tactics That We Have Rigorously Tested In The Derek Rake Insider Labs For Maximum Effectiveness

Inoculation techniques will “bulletproof” your woman from getting seduced by other men. Let’s face it: if she’s hot, there will be guys out there who are waiting to pounce on her. With Inoculation, you’ll put her in COLD MODE whenever she’s not with you – so that she resists the charms of other guys who try to hit on her.

The Open Loop is a classic storytelling device which you can use to capture a woman’s attention and make sure that she is captivated by you throughout the conversation. You’ll remember that as long as a woman pays attention to you, it’s just a matter of time before she falls in love with you. Using the Open Loop technique is how you do it!

The “Reverse Friend Zone” is exactly what it says on the can: with this technique, you’ll put a woman in the Friend Zone! Women cannot handle rejection – and this is the reason why the “RFZ” (as it’s affectionately known) is so darn effective. If a woman goes cold on you, use the RFZ on her and she’ll jump back to life, guaranteed.

The “Three Connectors” explain the inner workings of some of the best known hypnotic language patterns and Shogun Sequences that power up Shogun Method. Pepper these in your everyday conversations and your woman will be more subservient and vulnerable to your charms. This Module also comes with three brand new Shogun Sequences which you can use across all IRAE stages.

The World’s One And Only
10-Step Attraction Roadmap
Revealed For The First Time, Ever

Understanding the FUNDEMENTALS of being a great CONVERSATIONALIST is the Most Important facet of connecting with people for the first time.

The Approach Women Program is an online access program. It offers the 20 lessons for you to learn step by step how to approaching women by taking the action. Also gives you the advices how to kill your fear and help you to create more confidence.

HERE’S THE DARKEST, MOST SINISTER “GET YOUR EX BACK” METHOD YOU WILL EVER FIND IN A LIFETIME

Drawing from a decade of dating coaching experience, we designed this course to help regular men worldwide unleash their inner charisma. Over six weeks, you will develop a more attractive and confident way of interacting with women and the world – so that dating and attraction come easy.

16 pdfs filled with new Shogun techniques and tactics.
Derek Rake is the founder and chief coach of one of the world’s largest dating and relationship coaching companies, specializing in Mind Control and deep persuasive psychology.

MKDELTA is an invite-only project between senior tier of Derek Rake’s clients where new covert hypnosis-based techniques are devised and tested in the field.

This system for men is designed to get a woman sexually addicted to you. It shows you how to bypass a woman’s logical decision making process and install uncontrollable feelings of lust and primal desire it her subconscious.

Imagine if every single month, I gave you something like the “Sticky Note” hack — a brand new strategy or tactic you can implement immediately, and use to stuff your phone book full of hot girls’ numbers, schedule more dates that you could ever possibly have time for, and build an abundant dating life in no time flat, from scratch.

Don Amante introduces the Sensual Hunter Method, also referred to as the Sensual Predator Method. It is a process for luring girls through conversations and turning them sexual. It is way of seducing using psychological techniques to get a girl to realize she has to have sex with you.

Imagine if every single month, I gave you something like the “Sticky Note” hack — a brand new strategy or tactic you can implement immediately, and use to stuff your phone book full of hot girls’ numbers, schedule more dates that you could ever possibly have time for, and build an abundant dating life in no time flat, from scratch.